The purpose of this paper is to discuss the evolving methods to test toxicology in ways that minimize the negative impact on animals as much as possible.

Animals are traditionally used as test subjects during drug development studies in order to reliably detect the toxic properties of chemicals. The purpose of animal testing is to study and try and predict how chemical substances might interact and affect normal biological functions in humans.

Drug companies are better able to predict safe drug exposure levels that offer therapeutical value and enhance the preservation of human health by testing the effects that certain chemicals have on animals. Toxicology testing is a highly important and crucial part of any drug study, helping patients to live safely and derive the intended benefits of natural and synthetic substances while avoiding harm.

Eliminating the use of animals in toxicology testing, is a difficult challenge. The purpose of this paper is to discuss the evolving methods to test toxicology in ways that minimize the negative impact on animals as much as possible.

Evolution of Toxicity Testing in Animals 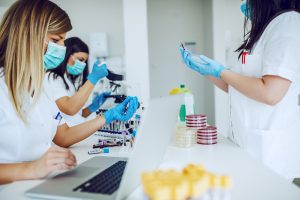 The pharmaceutical world is constantly evolving and companies around the world have a desire to reduce animal use in toxicology testing. The introduction of small laboratory animal research almost a hundred years ago brought security to the regulated community and allowed international harmonization regarding toxicity standards for human usage (Hartung and Leist, 2005 pg.91).

For many years toxicology has been frozen in time, however the replacement, refinement, and reduction of animals in research (the 3R’s) is a well-established concept, originally described in 1959. Throughout the 1960s and 1970s this idea of alternatives to animal research increased visibility, and finally gained momentum in the 1980s when governments, academia, and industry became more involved (Chapman et, al. 2013, p.89) with this initiative. It has only been 50 years since the initial publication that the 3R’s are truly coming to age, with growing recognition of their benefits and widespread efforts to identify new opportunities for implementation (Chapman et, al. 2013, pg.89).

An international workshop was convened to identify opportunities to further reduce animal use and improve efficiency in drug development (Chapman et, al. 2013, p.89). An important driver for new development and reproductive toxicity guidelines established by the International Conference on Harmonization (ICH) was to produce guidelines that used fewer animals while still providing adequate evaluation of the exposure to a chemical at any point (Chapman et al, 2013. p.93).

Today, the industry is observing more and more disconnect between the development of a mechanistic, modern toxicology program and the rigid approaches governing the regulatory requirements (Hartung and Leist, 2005 pg.91). The discovery of new information rich pathways and technologies, combined with scientific knowledge can be used to minimize the use of animals in regulatory studies and overall drug development.

The Replacement, Refinement and Reduction (3R’s) concept acts as the foundation of the methods and approaches mentioned below. These methods do not fully remove animal use in regulatory studies, instead they suggest ways of implementing practices in toxicology testing that attempt to minimize studies that require animal use.

It is important to recognize that even though these methods drive development of more efficient and less animal-dependent tools for safety testing, data derived from novel testing may not be accepted for traditional regulatory industry standards that exist today (Hartung and Leist, 2005 pg.94). Company will need to fully research each method and the correct data analysis procedure. Given their importance, the utility of animal models for prediction of human safety should be regularly reviewed as advances in both scientific understanding and technical methods continue to evolve (Chapman et, al. 2013 p.88).

The international workshop convened to identify opportunities to reduce animal use and improve efficiency in drug development. Various related themes included (1) accelerating the progress and uptake of in vitro methods, (2) incorporating that latest science into safety pharmacology assessments, (3) optimizing designs for rodent studies to support the development of biologicals, and (4) consolidating various approaches and endpoints in developmental and reproduction (Chapman et al, 2013. p.89).

The methods described below can be used to help reduce animal use in regulatory studies:

I. Development of New Vitro Approaches

The development of new in-vitro approaches to replace animal bioassay testing for assessing potential human toxicity of compounds in drug development has the potential to greatly reduce the need for animal testing. The following models discuss the multiple drivers for developing new in vitro approaches including scientific and technology advances, and legislative changes. (Chapman et, al. 2013, p.89)

There is a challenge regarding the lack regulatory acceptance of in vitro methods. According to Chapman, there are two general classes of biological methods used in the discovery and development of new products: holistic bioassays and methods that evaluate specific biological mechanisms eg. in vitro and in vivo. The regulatory validation process of in vitro methods to replace an in vivo bioassay may deter scientists from developing them because it can be difficult to design an in-vitro test that adequately mimics the performance of the drug when using an in-vivo method. However, not all scientifically validated methodologies require regulatory acceptance. By focusing on intended use the scientific validation becomes significantly less intimidating. (Chapman et al. 2013. p.90).

Currently, the high failure rate of candidate drugs after the decision to begin regulatory toxicology testing represents the largest opportunity to reduce overall animal use. (Chapman et, al. 2013, p.90). According to Chapman, “nine out of ten candidates beginning clinical phase I will not achieve marketing approval. However, much of regulatory animal testing is front-loaded and must be completed before clinical trials may proceed. Therefore, as candidates fail in clinical development, the animal testing associated with those failures could have been avoided” (Chapman et, al. 2013 p.91).

The use of predictive in vitro techniques will attribute to better decisions in the drug design which will lead to: improvement of the quality of candidate drugs, decrease drug candidate attrition rates due to toxicology incompatibility, and ultimately reduce the number of animals used (Chapman et, al. 2013, p.91).
OECD Test Guideline no.404 recommends the conduct of the in vitro assays to limit the severity of toxicity for compounds that progress to in vivo evaluation (Chapman et, al. 2013 p.91).

Also, it is important to note, in vitro studies can be used to improve the predictive value of in vivo toxicology studies by supporting the selection of appropriate animal species by ensuring that testing is not conducted in species that lack human relevance (Chapman et, al. 2013 p.91).

This section provides opportunities to improve efficiency in safety pharmacology studies by ensuring appropriate statistical analysis and science are incorporated into your practices.

This approach is common among biologics and anti-cancer therapeutics however many drug companies shy away from the combination of toxicology studies because of the fear of regulatory disapproval. According to Chapman, “animal use may be reduced by replacing standalone safety pharmacology studies with integrated toxicology studies, which is consistent with the ICH guidance.

When studies are combined, animal use may be reduced by 20-40%” (Chapman et, al. 2013, p.92). Incorporating safety endpoints into toxicology studies that are being carried out at an IND stage, can be applicable to the Clinical Trial Application. Though this approach is less common, it has a great potential to reduce animal use and is gaining strength among regulators;

Investigators sometimes fail to incorporate measurement error and statistical power into study designs and interpretation, which leads to repeat experiments. According to the OECD TG 425, “information that will help in the focus of the study design on the test substance includes, the identity, chemical structure, and physic-chemical properties of the test substance, this will allow you to more efficiently test for chronic toxicity potential and minimize animal usage” (OECD, 2008 p.2).

The ICH S5 guidance on testing the medicines for reproductive toxicity was the first harmonized guideline for nonclinical testing to half the numbers of animals required for evaluating Development and Reproductive Toxicology (DART) hazard of new drugs. (Chapman et, al 2013 p.93).

a. Use of DRF Data

According to Chapman, it may be possible to make decisions early in drug development that could prevent the need for a full embryo fetal development (EFD) test in two species. The ICH S5 guidance recommends the appropriate numbers of animals should be used, therefore usually the does range finding (DRF) is found prior to the EFD test; If a positive result with clear evidence from development toxicity is found in the DRF EFD study then it is unlikely another study will provide additional data for safety and labeling (Chapman et al, 2013 p.94).

The toxicity level of the new chemical may be a risk when considering this model, however alternative development toxicity assays are being studied and are promising to provide valuable information in predicting human hazard. (Chapman et, al 2013 p.94).

b. Rodent Models for Safety Assessment

It is evident that animal use cannot completely be eliminated, however the OCED TG 452 gives recommendation to ways to optimize animal testing in rodents. In this guideline the preferred rodent species is the rat, although other rodent species, eg, the mouse may be used.

Rats and mice have been preferred experimental models because of their relatively short life span, their widespread use in pharmacological and toxicological studies, their susceptibility to tumor induction, a large amount of information is available on their physiology ad pathology (OCED, 2008 p.2).

The purpose of these methods is to discuss the processes for regulatory acceptances of alternatives in animal toxicology testing, including the need for formal validation studies on some occasions but proof of scientific validity on others. (Chapman et al, 2013 p.89). Many of these alternatives can will be tailored to a particular program and development needs.

However, it is recommended that companies focus on studies that directly impact and guide future research directions, so overall reductions in animal use would be maximized. The need for a leader in the industry in protecting animal welfare is high. Global commitment of companies, academic organizations, and regulators is needed to take 3R’s out of the competitive arena and to commit to share all they know and learn, for the benefit of the animals. There are many unrealized benefits and incentives that may be realized by employing a scientific approach to review and refine animal use. (Chapman et, al. 2013, p.101).

The Metrics of Quality Culture...Read More