These upcoming changes to the MDD aim to overcome the flaws and gaps of the existing regulatory framework to sell medical devices in Europe, which has been in place for 20 years. Once adopted by the European Parliament and the Council on Medical Devices, the new legislation will be in the form of directly enforceable regulations in Member States—in contrast to the current regime, which is based on Directives. Our white paper can help you understand these new regulations.

The existing regulatory framework has been in place for 20 years; recently coming under harsh criticism in the media and the political arena, in particular after findings of the French health authorities that a French manufacturer (Poly Implant Protese, PIP) over several years used industrial silicone instead of medical grade silicone for manufacture of breast implants. Several weaknesses undermined the main objectives of the three medical device directives, i.e., safety of medical devices and their free circulation within the internal market were identified in public consultation held by Commission in 2008, and again in 2010. This revision aims at overcoming the flaws and gaps while maintaining the overall objectives of the legal framework.

Currently 78 notified bodies are designated under the three medical device directives. Authorities, manufacturers and Notified Bodies report significant differences as regards, on the one hand, the designation and monitoring of the notified bodies and the quality and depth of the conformity assessment performed by them; such as unannounced factory inspections or product checks, leading to uneven level of protection of patients and users safety as well as to a distortion of the competition between manufacturers of similar products.

Experience with the application of the vigilance system and other legal instruments available to Member States (e.g., safeguard clauses) has shown that national competent authorities do not have all the necessary information available and react in different ways to the same problems which begs the question of a harmonized level of protection.

No exact data exist as regards the medical devices placed on the European market. Several Member States have set up their own electronic tools, and multiple registration requirements in individual member states placing a considerable administrative burden on manufacturers and authorized representatives when they want to market a product in different Member States. Some have started imposing traceability requirements on economic operators. However, the national systems are not compatible with each other and do not allow traceability across borders which is necessary for an EU-wide high level of patient safety.

External experts are currently not involved in the regulatory process in a structured way.

The management of the regulatory system at EU level has shown weakness which have been reported by various interested parties; it is considered as not sufficiently efficient and effective. There is no legal basis in the medical devices directives to ensure an overview of the situation at EU level and appropriate coordination between Member States. There is a lack of technical, scientific, and logistic support leading to a lack of uniform application of the rules and of common reactions in European market. The demarcation between the medical device directives and other regulatory frameworks is not always clear which leads to the application of different legal regimes. Obligations of economic operators are currently not clear or covered by the directives at all.

Regulatory gaps exist with regard to certain products. For example, products manufactured utilizing nonviable human tissues or cells, implantable or other invasive products without a medical purpose, and the reprocessing of single-use devices are currently not regulated by EU legislation.

IVD’s “in-house” tests are currently exempted from the IVD directive.

Requirements of the IVD directive, needs to be adapted to technological, scientific, or regulatory developments.

For medical devices, some legal provisions, such as essential requirements and criteria for risk classification of devices, do not sufficiently reflect the technological and scientific developments.

EU legislation currently does not make provision for any coordination between Member States regarding the assessment of applications for clinical investigations on medical devices to be conducted in more than one Member State.

Moreover, this revision provides the opportunity to align the provisions regarding clinical investigations on medical devices, where appropriate, with the recently adopted Proposal for a Regulation on clinical trials on medicinal products for human use.

The current medical device directives are based on the treaty provisions regarding the establishment and functioning of the internal market (Article 114 TFEU). The Libson Treaty has added a legal basis in the area of public health for the adoption measures setting high standards of quality and safety of medical products (Article 168(4)(c) TFEU). The proposed revision of the existing directives will integrate the modification of the Libson Treaty, to improve the level of protection of public health for all European parties and users.

Harmonized rules and procedures will allow manufacturers and Subject Matter Experts (SMEs) to reduce costs related to national regulatory differences, while ensuring a high and equal level of safety.

Moreover, this revision provides the opportunity to align the provisions regarding clinical investigations on medical devices, where appropriate, with the recently adopted Proposal for a Regulation on clinical trials on medicinal products for human use. 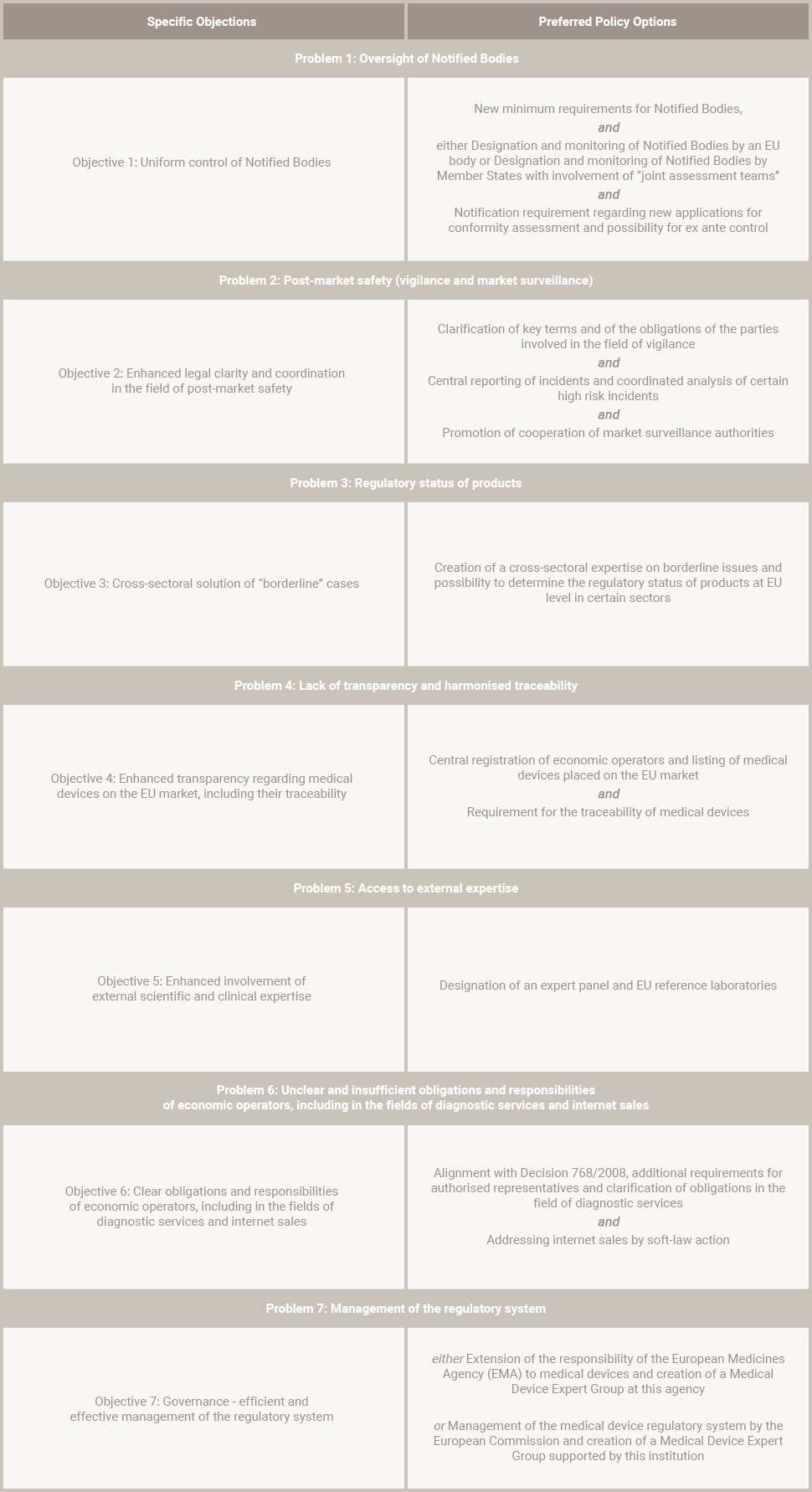 The new legislation will be in the form of regulations – which are directly enforceable in Member States – in contrast to the current regime, which is based on Directives.

The following table indicates the preferred policy options in the field of medical devices: 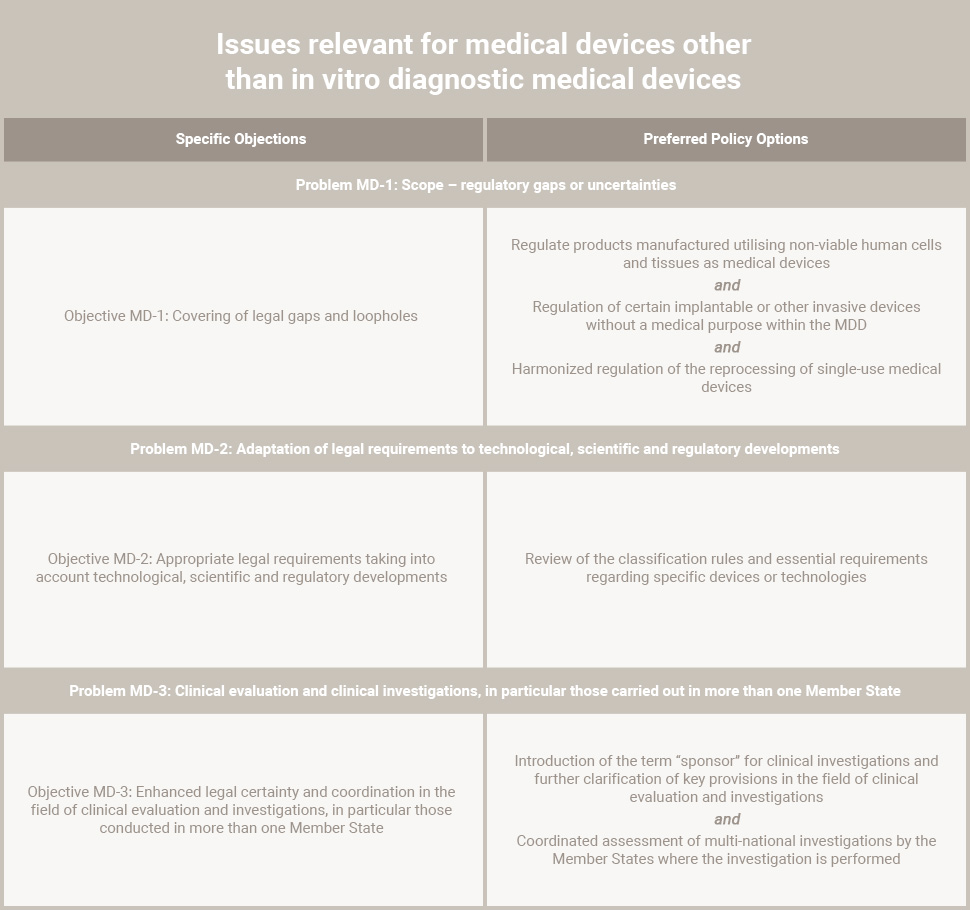 The following tables indicate the preferred policy for in vitro diagnostic devices: 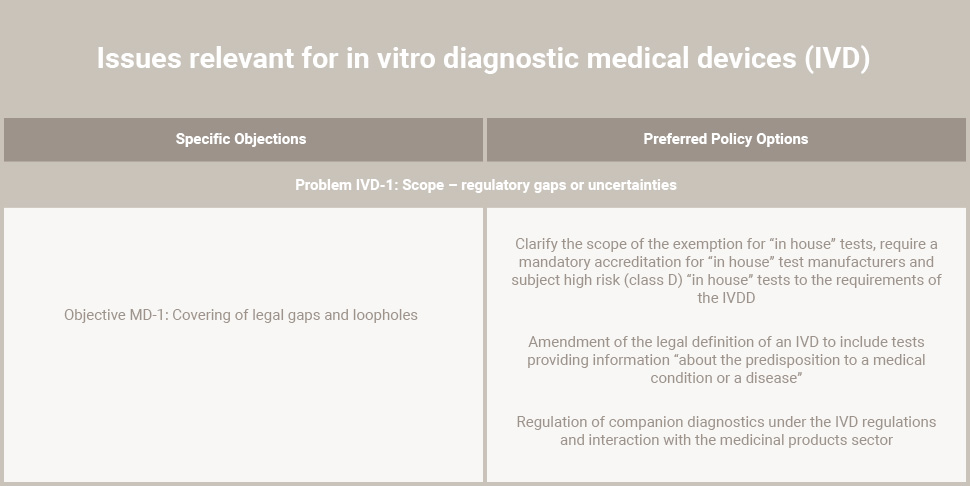 The regulation proposal was submitted to European Parliament and the council. There was speculation there would be word from Parliament in September 2016, however that has not happened. The major difference however, is that the new legislation will be in the form of regulations—which are directly enforceable in Member States—in contrast to the current regime, which is based on Directives.

The new regulations cover a wide range of products, from sticking plasters to hip replacements, pacemakers to laboratory tests for the assessment of medical interventions. They also opened up the policy to a host of other medical technologies—aesthetic devices, weight loss surgery and apps among them.

As it currently stands (according to the Council text which is the basis for trialogue discussions), the proposed new regime will mean the following:

European Union (2012), Executive Summary of the Impact Assessment on the Revision of, the Regulatory Framework for Medical Devices. SWD(2012) 274 Final. Brussels. Resource.

Developing a Quality System on a Managed Budget